The musical band from Olbia, protagonist of Italian pop music of the 70s, takes its name from the collage album of the band Le Orme.

The first nucleus of the band was established in Olbia in 1971.
The first line-up includes Masino Usai on drums, Piero Pischedda on solo guitar, Pino Ambrosio on keyboards and vocals, Tore Fazzi on bass and vocals, Piero Fazzi on rhythm guitar and vocals, as well as singer Luciano Degortes, who in 1974 will leave the group for good. , also for the call to military service.

The quintet begins to play in Sardinia, but already in 1972 participates as a guest at the Castrocaro festival with the song Tu che stai al tutto. The band is noticed by Massimo Di Cicco, producer who in 1975 allows the debut of the group in the hall for the recording of the song Angeli Errati, which will become the first single of his discography. 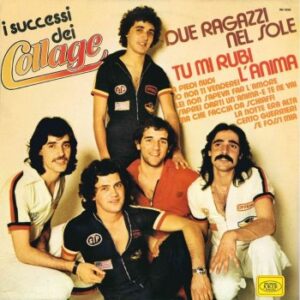 Already in the five-man line-up (due to the defection of Degortes), the group of Collage obtained a contract with Harmony, a label owned by Walter Guertler’s SAAR, and in 1976 won the Castrocaro Festival with the song Two boys in the sun, with which is very successful and achieves fame among the general public.

In 1977 the band arrives in Sanremo to participate in the 27th edition of the Italian song festival with the song Tu mi rubi anima: the first two singles reach the top of the charts and bring success to their first album Two boys in the sun, reissued after participating in the Sanremo festival with the title You steal my soul. 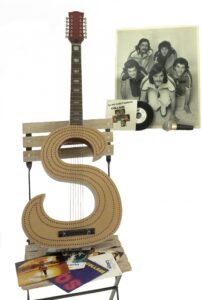 In the following years, success always arrives on time with songs like Red Sun, She did not know how to make love, Woman music, Another summer, People Talk, Boys who love each other.

Between one tour and the next, the band participates in three other editions of the Sanremo festival (at the XXIX edition of 1979 with La people speaks, at the XXXI edition of 1981 with The boys who love each other and at the XXXIV edition of 1984 with Quanto ti amo ) and launches in Spain and South America Como dos niños, Little by little …, La gente habla and Sol caliente, Spanish versions of some of the band’s greatest hits, which are placed at the top of the charts.

Inside the hotel, in the breakfast room, some historical photos of the group are exhibited, and it is inevitable that customers pause to remember, together with him, the songs that are still broadcast on TV and radio today, melodies that in the the seventies made many people fall in love.

Which beaches to visit in Olbia?

Which beaches are worth visiting in Olbia? In this short article you will have useful…

Information about the monuments of Olbia

Olbia is not just the sea, but a concentration of history In this short article…

Dishes of the Olbia’s cuisine

Olbia's cuisine, a mixture of sea and land In this short article we want to…

2021 Hotel Ambrosio La Corte - P.I. 01222810903 | Credits Webconsulentzia
We use cookies on our website to give you the most relevant experience by remembering your preferences and repeat visits. By clicking “Accept”, you consent to the use of ALL the cookies.
Cookie settingsACCEPT
Manage consent

This website uses cookies to improve your experience while you navigate through the website. Out of these, the cookies that are categorized as necessary are stored on your browser as they are essential for the working of basic functionalities of the website. We also use third-party cookies that help us analyze and understand how you use this website. These cookies will be stored in your browser only with your consent. You also have the option to opt-out of these cookies. But opting out of some of these cookies may affect your browsing experience.
SAVE & ACCEPT